Ready to join Hekmatyar in one table to have joint meal, says Abdullah 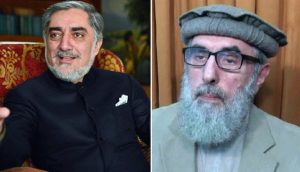 The Chief Executive Officer Abdullah Abdullah has said he is ready to have meal together with the notorious warlord Gulbuddin Hekmatyar in one table in a bid to help serve the national interests of the country.

The remark by Abdullah comes as the Afghan government is expecting to finalize a peace deal with Hezb-e-Islami led by Gulbuddin Hekmatyar.

In an interview with BBC, Abdullah said any step that would reduce tensions would be welcomed, emphasizing that the people of Afghanistan would welcome if negotiations between Hezb-e-Islami and Afghan High Peace Council yielded positive results.

Abdullah further added that the situation has changed as he had the support of the party under the leadership of Arghandiwal.

He was responding to a question regarding concerns about Hekmatyar’s return however he said “The issue that Hekmatyar had more problems with certain people and less with some others, perhaps your gesture is towards the era of Islamic government, then the Taliban era and resistance against Taliban and then the 15 years that passed and the elections that followed where I had the support of Hezb-e-Islami under the leadership of Arghandiwal.”

He also added that the personal interests cannot create barriers when the issue of national interest comes forward, insisting that a peace deal with Hezb-e-Islami will not have a major affect to completely change the situation in the country.

However, he said he is hopeful that the other groups will learn from him and join peace talks with the Afghan government.

Hekmatyar is considered is a notorious warlord for his involvement in the devastating civil war and insurgency following activities following the fall of the Taliban group.

Earlier, the group was insisting on full withdrawal of the foreign forces from the country to participate in peace talks, a similar demand put forward by the Taliban group for peace talks.