Ramadan Mubarak to the Afghan People – Perspectives of an Indian American 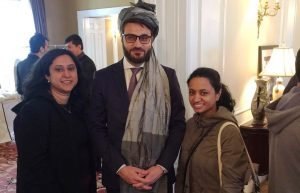 Along with over a billion people across the globe, the people of Afghanistan are getting ready to celebrate the Muslim holy month of Ramadan. I was recently invited to take part in an Evening Tea with Afghanistan Ambassador Hamdullah Mohib. I am a part of the board of Network of South Asian professionals (NetSAP) in Washington, D.C. The Afghan embassy was kind enough to welcome us for this special event. But I had little knowledge of Afghanistan’s people and culture. What cultural similarities do Afghan people share with Indians? This was the first question in my mind.

A quick Google search informed that Afghanistan is indeed part of South Asia. But it seemed different than what I am familiar with as an Indian American. The majority of Afghans are Muslims. While
there are Muslims in India and Ramadan is celebrated there, India has a Hindu majority. I found videos of Attan dancing. It was very beautiful, with swinging arm movements and scarves. It seemed different from Bharatnatyam, an Indian classical dance which expresses themes of Hindu mythology. I was starting to understand that Afghan and Indian cultures are distinct. I was looking forward to the opportunity to learn more.

When I arrived at the embassy, I was struck by how beautiful it was. Everyone was warm and welcoming. The staff member who greeted me was wearing a kurta. I wondered if I should have worn a salwar kameez, a garment shared by both countries. There was an elegant table set with a white table cloth and ornate silverware. We were served milk tea. There were chicken kabas and for dessert, fruit and cookies (kulche birinjee). The arrangement of grapes and watermelon was quite beautiful, with its pink and green colors. I learned that Afghanistan is famous for its dried fruit.

The conversation with Hamdullah Mohib was very informative. He mentioned that India and Afghanistan had friendly relations and the two countries have mutual respect for each other. Ambassador Mohib also had something in common with we South Asian professionals. He previously founded the Afghan Students Association of the UK. Ambassador Mohib mentioned he has a background in technology. Many Indians are in top leadership positions in U.S. technology companies. A funny moment came when Ambassador Mohib asked us if everyone in our group was Indian. We all were, except one sole colleague from Bangladesh.

Ambassador Mohib encouraged us to visit Afghanistan. He mentioned that the country is not like it is known from the headlines. Afghanistan is a young country with most of its population under age 35. It is great that Ambassador Mohib has a background in technology because he can help guide this young country towards the future. Afghanistan is improving their education system and expanding women’s rights. Afghan President Ashraf Ghani has called this the “Decade of Transformation.”

I was lucky enough to return to the Afghan embassy on a Saturday where many embassies in DC opened their doors to the public. That day I visited the embassies of Japan, Korea, Turkey and Barbados. The Afghan embassy was the absolute best! There was dance and music. I listened to the tabla and harmonium, which reminded me of my own Indian culture. I got to see the attan in person, with  the people wearing their beautiful clothing. I also learned about the Hoopoe Books for Afghanistan program. Afghans have a long history of story telling. This program provides Afghan children with traditional stories in book form. After my visit to the Afghan embassy, I visited the National Islamic Center here in DC, which of course will be  preparing for Ramadan.

Young Afghans are yearning for progress and hope to rebuild their country. I would like to reach out a hand in friendship and in hope. I hope this Ramadan brings wonderful things to Afghanistan and its people. Ramadan Mubarak!

Sue Menon is from Queens, NY and serves as the National Liaison for the Network of South Asian Professionals (NetSAP).

Photo Caption: Myself and a fellow board member with Ambassador Hamdullah Mohib at the Afghan Embassy as part of the around the World Embassy Tour in Washington, DC.

Afghanistan’s caretaker government hopes for the resumption of flights...