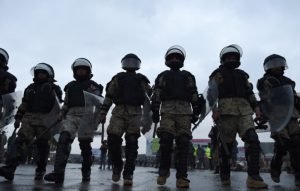 The protests have turned violent in eastern Laghman province of Afghanistan amid reports at least six people were killed or wounded during the clashes with the police forces.

Dozens of protesters took to the streets of Mehtarlam city earlier today to protest against the scuffle between a member of the provincial council and a resident of the city.

According to reports, at least one person has lost his life during the violence and five others sustained injuries after the police forces opened fire in response to the attack by the protesters on government compounds.

The local officials are saying that the police forces opened fire to disperse the protesters who were hurling stones on the government offices.

Provincial governor’s spokesman confirmed the incident but did not elaborate further.

In the meantime, reports indicate that tensions are still high in the area as the protesters refuse to disperse and their protests.

Laghman is among the relatively calm provinces in East of Afghanistan where fewer security related incidents are reported from as compared to the other parts of the country.