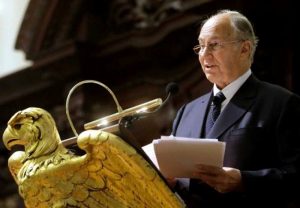 The spiritual leader of Shia Ismaili Muslims Prince Shah Karim Al Hussaini Aga Khan called for greater cultural understanding between the Muslim World and the West, rejecting the notion of a fundamental ‘clash of civilizations’.

In his speech at Harvard University, Prince Aga Khan once again insisted on pluralism and said the society must strive to be more ‘pluralist’ and ‘cosmopolitan’.

His remarks were apparently aimed at searching for the difference and diversity by the people who should learn it.

Addressing a packed audience at Memorial Church, Prince Aga Khan said globalization should not mean the creation of a single, homogenized society where all differences are erased, rather it means people should seek out diversity and learn from it.

Insisting on mutual respect regarding what we have in common and what makes us different, Prince Aga Khan said “In my view, the deeper problem behind any prospective clash of civilizations is a profound clash of ignorances. And, in that struggle, education will be an indispensable weapon.”

Issuing a reminder to the Muslims of the world, he said the central tenet of Islam is to celebrate the ‘common humanity’ among all the people of the world.

He said “My hope is that the voices of Islam itself will continue to remind the world of a tradition that, over so many centuries, has so often advanced pluralistic outlooks and built some of the most remarkable societies in human history.”

He also went through several key obstacles that pluralism faces today, including marginalizing the intelligentsia of a given community by some governments and institutions, lack of “respect for justice & equal opportunity for all”, lack of a “concerted educational effort” to teach pluralistic values, and others.

Considered a descendant of the Prophet Muhammad (P.B.U.H), Prince Aga Khan is the 49th imam of Ismaili Muslims who are a branch of Shia Islam with followers in Asia, Africa the Middle East and North America.