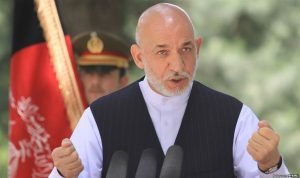 Afghan president Hamid Karzai accompanied by a delegation of government officials on Monday left capital Kabul for a two state visit to India.

The source further added, “During his two-day visit, President Karzai is scheduled to meet with President Pranab Mukherjee, Prime Minister Manmohan Singh and other Indian officials.”

“Discussions at the meetings will focus on ways to enhance bilateral relations in various areas, strengthening of Afghan civil and military institutions, regional affairs and other issues of mutual interest,” the statement added.

During the visit, President Karzai will also receive an honorary doctorate from the Indian Lovely Professional University (LPU) at a formal ceremony, to be attended by the President of India.