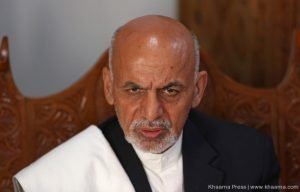 President Ashraf Ghani Ahmadzai visited Pul-e-Charkhi prison late on Wednesday night to meet with the prisoners and discuss their issues.

The presidential palace media office following a statement said the inmates inside the Pul-e-Charkhi prison thanked President Ghani for visiting the prison shortly after taking the office as the new president of the country.

The statement further added that Pul-e-Charkhi inmates urged President Ghani to consider the issues of prisoners with health issues, aged prisoners and those prisoners whose fate are not clear and are kept in the prison despite their terms to serve in the jail have finished.

According to the inmates, certain prisoners have been left with unknown fate for the past 13 years, while several prisoners are old enough to serve in the prison.

In the meantime, President Ghani promised the inmates that their case will be reviewed from Monday and he has instructed the attorney general office to present the report to him after the review was completed.

President Ghani also promised that he will visit the prison within the next few months and will order for the formation of a commission to review the cases of prisoners.