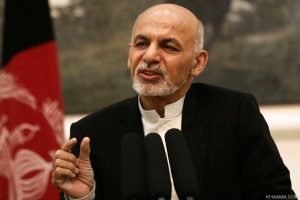 President Mohammad Ashraf Ghani is expected to visit Iran in the near future to conclude a bilateral security agreement between Kabul and Tehran.

According to the Iran media agencies, the bilateral security agreement between Tehran and Kabul would focus on further expansion of mutual cooperation between the two nations in fight against terrorism an drug trafficking.

President Ghani’s spokesman Nazifullah Salarzai quoted by FARS News said the visit is scheduled in the near future.

No further details were given regarding the exact time of the scheduled visit by President Ghani to Tehran.

This comes as Mohammad Hanif Atmar, national security adviser to President Ghani, visited Iran last week to hold talks with the Iranian officials regarding the bilateral ties between the two nations.

During a meeting with Iran’s foreign minister Mohammad Javad Zarif, Atmar said senior Afghan government officials are due to visit iran in the near future to conclude a comprehensive accord for cooperation between Kabul and Tehran.