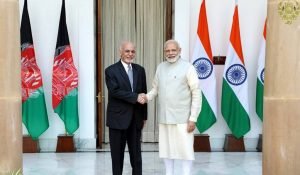 The Office of the President, ARG Palace, in a statement said the leaders of the two countries held talks on further expansion of the bilateral ties between Kabuul and New Delhi, joint fight against terrorism, expansion of bilateral economic and transit relations, regional connectivity, development of Afghanistan-India air corridor, online higher and technical education, and joint investment in various sectors in Afghanistan.

He also added that an agreement was reached regarding the deployment of the working teams for the immediate start of works on the mentioned projects.

ARG Palace further added in its statement that President Ghani and Prime Minister Modi also agreed to increase flights as part of the air corridor and establish new routes between Herat and Amritsar and some other key cities.

They also agreed that the working teams of the countries start work on the projects for the process of marbles, export of marbles, and production of medicines.

Prime Minister Modi said the government of India has extended the scholarships program for Afghanistan for another five years and the country would also train the government staff.

He said the Foreign Minister of India would visit Afghanistan in the near future to discuss the strategic cooperation between the two countries.

In his turn, President Ghani called the recent exhibition in Mumbai as beneficial for both countries and said and hailed India for its support to Afghanistan in various sectors, including the implementation of infrastructural projects.