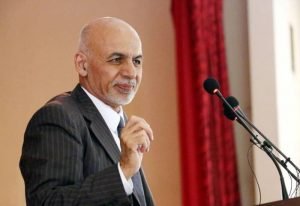 President Mohammad Ashraf Ghani left Dushanbe for United Kingdom after concluding meetings with the Tajikistan officials, the Office of the President said.

According to an online statement, President Ghani will attend the International Anti-Corruption Summit in London.

Corruption continues to remain a major issue for the Afghan people despite the government stepped up efforts to uproot it but the efforts have not proven to be satisfactory for the people and international community.

President Ghani called corruption a ‘national stigma’ during a conference in capital Kabul last week, admitting that has not been able to uproot it from the governmental institutions.

In his remarks at the European Conference ‘the way ahead for anti-corruption in Afghanistan’ President Ghani said there are certain cases and factors which are keen to weaken the government institutions.

President Ghani further added that corruption a legacy of the past and hundreds of cases are lying intact in the Attorney General office.

He also added that the government is carefully considering a proposal to establish a specialized Anti-Corruption Justice Center.

President Ghani said the government is mainly engaged with an imposed war which prevents the leaders of the government to focus on fight against corruption.