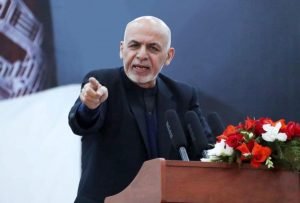 President Mohammad Ashraf Ghani has ordered the provincial governors to instruct all government employees to obtain voter cards together with their family members.

The Office of the President, ARG Palace, said President Ghani discussed the issue of the voter registration with the provincial governors of all 34 provinces during a video teleconference.

He instructed the governors, provincial military and security officials, and the provincial election commission staff to expedite the process of voter registration.

According to ARG Palace, President Ghani also instructed the provincial officials to ensure all facilities are in place to pave the way for the women to obtain voter cards.

He emphasized on the important role of Ulemas, influential figures, civil society organizations, youths, and media to work with the election commission for public awareness and encouraging the people to participate in the elections.

The IEC officials said earlier this month that the elections will be held on 20th October, emphasizing that the participation of all political parties and institutions will help the commission to organize transparent and fair elections.

The international community will financially support the upcoming elections with the United Nations Assistance Mission in Afghanistan saying, in December 2017, donors pledged to fund up to 90 per cent of the US$28.4 million voter registration budget, in addition to pledging ongoing assistance to the IEC and the Electoral Complaints Commission (ECC).