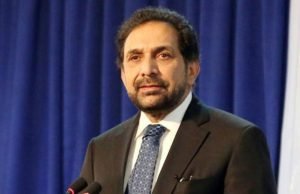 President Mohammad Ashraf Ghani has fired his most senior adviser Ahmad Zia Massoud who was in charge of the presidential adviser for reforms and good governance.

Sources in the Office of the President, ARG Palace, confirmed the dismissal of Mr. Massoud but no further details were given regarding the circumstances that led to the decision by the President to fire his senior adviser.

Mr. Massoud took oath as the special envoy to President Ashraf Ghani Ahmadzai for reform and good governance earlier in October 2014, weeks after the formation of the government of national unity.

Massoud was a close ally of Dr. Ghani during the election process. He endorsed Dr. Ghani’s team during the second round of election.

He was expected to be appointed as chief executive officer before the launch of negotiations on the formation of a national unity government.

The agreement to form a unity government was reached between Dr. Abdullah Abdullah and Ghani’s camps following mediation by US Secretary of State John Kerry to resolve the election deadlock.