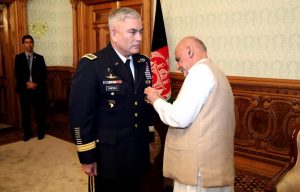 The Office of the President in a statement said the First Grade High State medal of Storai was conferred on Gen. Campbell during a ceremony in ARG Presidential Palace.

The statement further added that the ceremony was attended by the Afghan security and defense officials as well as officials of the Resolute Support mission.

President Ghani hailed Gen. Campbell for his services in the fields of supporting and equipping the Afghan National Security Forces (ANSF), the statement said, adding that Gen. Campbell was also praised for his joint efforts together with the Ministry of Defense and Ministry of Interior for maintaining security in the country.

Lieutenant General John Nicholson will assume charge of the U.S. Forces in Afghanistan after his nomination by President Barack Obama was approved by U.S. Senate Committee earlier this month.