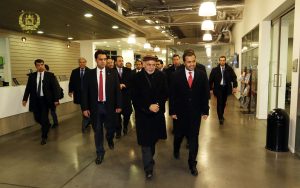 President Ghani is accompanied by the Minister of Foreign Affairs Salahuddin Rabani, Minister of Finance Eklil Ahmad Hakimi and Nasrin Oryakhil who is Minister of Labor, Social Affairs, Martyrs & Disabled.

He is scheduled to have a speech at the conference and meet with some world leaders being part of the summit including his French counterpart François Hollande.

Upon the conclusion of his visit to France, the President is reportedly visiting Italy, Germany and Sweden.

On Monday, he will meet Italy’s President and Prime Minister and discuss improving relations between the two countries.

On Tuesday, the President is scheduled to visit Germany and take part in the event organized to mark the 100 years of the country’s friendship with Afghanistan.

Late on Thursday, Afghan delegation will leave Germany for Sweden where a number of agreements would be signed between the two sides.