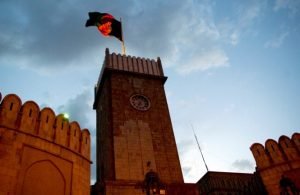 The Afghan President Mohammad Ashraf Ghani has approved contracts for the new projects worth around 4.7 billion Afghanis.

The Office of the President, ARG Palace, in a statement said the new contracts were approved during the latest meeting of the national procurement commission chaired by President Mohammad Ashraf Ghani on Monday.

The statement further added that the contracts approved during the meeting include maintenance contract for Hairatan-Mazar railway network, contract for the construction of 12 kilometers of road in Farah city, and contract for the procurement of transformers for the Da Afghanistan Breshna Sherkat.

Other contracts approved during the meeting include contract for the maintenance of the billing system of the ministry of information technology and telecommunications, contract for the hiring of assistant firm for the implementation of the Citizens’ Charter program in Kandahar, and contract for the procurement of trash bins for the Kabul municipality.

According to the ARG Palace, the meeting also approved the contract for the modification of Baghlan-Kabul 500kW transmission line project which will provide cover for more provinces.