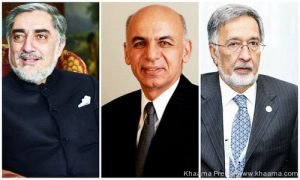 According to Nuristani, around 6,892,816 people including 64% male voters and 36% female voters had casted their votes in April 5 elections.

He said the election will likely go to the second round however it will become clear once the independent electoral complaints commission (ECC) completes its work.

The final official result is set to be announced on May 14 after a period for adjudication of hundreds of complaints over alleged fraud.