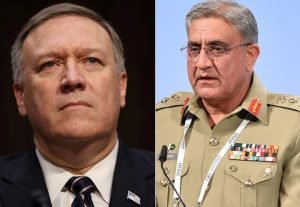 The US Secretary of State Mike Pompeo and the Chief of Army Staff of Pakistan General Qamar Javed Bajwa held talks regarding the Afghan peace and fight against terrorism.

She said they discussed advancing US-Pakistan relations, the need for political reconciliation in Afghanistan, and the importance of targeting all militant and terrorist groups in South Asia without distinction.

This comes as the relations between Washington and Islamabad remain strained after the announcement of the South Asia policy by President Donald Trump.

The US and Afghan officials are saying that the Taliban and Haqqani terrorist network are still having safe havens in Pakistan but Islamabad has rejected the allegations.

On the other hand, the Pakistani military officials admit that some residuals of the notorious Haqqani terrorist network still remain in Pakistan as the Afghan and US officials emphasize that the terror group’s leadership councils are based in the key cities of Pakistan, including Quetta city.

Addressing accusations of harbouring the Haqqani network on the Pakistan side, the Pakistani Military spokesman Maj Gen Asif Ghafoor conceded on Monday that some residual strength may still remain in Pakistan, according to Dawn News.

However, he claimed that no ‘stable’ network of the Haqqani terrorist network existed in Pakistan.