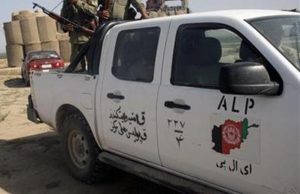 A policeman killed nine of his comrades in an insider attack in northern Kunduz province of Afghanistan, local officials said Thursday.

The incident took place late on Wednesday night after the assailant policeman belonging to the Afghan Local Police (ALP) forces opened fire on his comrades, leaving nine of them dead.

A spokesman for the 808th Spinzar Zone in North of Afghanistan Mahfuzullah Akbari confirmed that the incident took place on Kunduz-Aliabad highway.

According to the local officials, the assailant policeman likely had links with the Taliban group as he has escaped from the post after the attack, taking with him the weapons available in the post.

This comes as at least eight policemen lost their lives in a similar attack carried out nearly two weeks ago in southern Zabul province.

He said the policemen belonged to the Afghan Local Police (ALP) forces and the assailants also managed to take several weapons from the check post with them.

Earlier, at least eleven policemen lost their lives in a similar attack carried out by their comrades in southern Helmand province of Afghanistan.