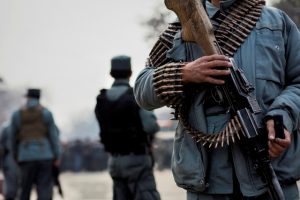 A policeman has killed eight of his comrades in the latest insider attack in southern Zabul province of Afghanistan, local officials said Thursday.

A security official confirmed that the policeman carried out the attack with the help of two others who were apparently brought into the check post as guests.

The official further added that assailants including the policeman managed to flee the area and an investigation is underway regarding the attack.

The latest insider attack follows nearly month after a policeman killed three of his comrades in eastern Laghman province of Afghanistan.

Earlier, at least seven policemen were killed in southern Kandahar province of Afghanistan in a similar attack.

There has been a considerable rise in insider attacks mainly among the Afghan police forces during the recent months alarming the security officials to take steps in a bid to reduce such incidents.

Meanwhile, the Afghanistan National Security Council (NSC) approved in principle the strategy to fight the enemy moles, a step that could reduce insider attacks in the country by large extent.