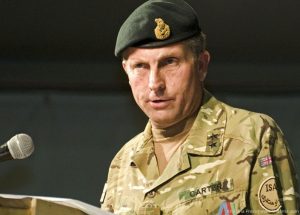 United Kingdom’s top military general in Afghanistan has said that peace negotiations with the Taliban group should have taken place a decade ago after the Taliban regime was ousted.

Deputy commander of the NATO-led coalition security forces in Afghanistan, Gen. Nick Carter said that talks with the Taliban group in 2002 would have been more successful.

The comments by Gen. Nick Carter comes after efforts to negotiate with the insurgents have faltered.

Gen Carter quoted by The Guardian said, “Back in 2002, the Taliban were on the run. I think that at that stage, if we had been very prescient, we might have spotted that a final political solution to what started in 2001, from our perspective, would have involved getting all Afghans to sit at the table and talk about their future.”

This comes as the government of Afghanistan boycotted peace talks following row over the status of a Taliban office in Qatar’s capital Doha. US Secretary of State John Kerry last week also expressed caution over whether peace talks on Afghanistan with the Taliban could take place.

In the meantime Gen. Nick Carter said that the Taliban group will eventually sit-in for peace talks as NATO is preparing to hand over the security responsibilities to Afghan security forces.