Peace prospects to increase when Taliban realize no chance of win on battlefield: Dunford 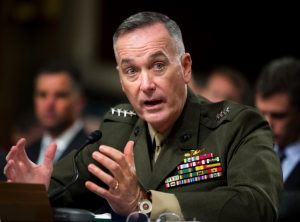 The Chairman of the Joint Chiefs of Staff Marine Corps Gen Joe Dunford has said peace prospects will increase when Taliban realize they have no chance of win on the battlefield.

Speaking to reporters after returning to Europe by concluding three days visit in Afghanistan. Gen. Dunford said the Afghan National Defense and Security Forces (ANDSF) have significantly increased their capabilities and made important gains by going on the offensive.

Gen. Dunford further added the Afghan forces went to the enemy first rathern than waiting for this year’s fighting season.

Dunford cited the Afghan forces’ offensive posture and improved capabilities, notably in air power, as possible reasons why the level of violence since the Ramadan observance ended earlier this month has been lower than anticipated.

“I think there’s a degree of optimism that the Afghan forces have the momentum this summer,” he said, “but I think the Taliban have proven to be resilient in the past, and I think there’s still a fair amount of fighting ahead.”

While Afghans previously were uncertain about their future, they now are looking out for the next several years, Dunford said. “It seems this time, their horizon is pushed out a little bit further, and they seem to have some confidence,” he told reporters.

But despite the positive developments, serious work remains, Dunford said, adding he is a realist in terms of the challenges ahead for Afghanistan.

“We’ve seen peaks and valleys in the Taliban before, but certainly on the ground right now, the Afghan forces have the
momentum,” he said, noting the Afghans have a “very good” plan this year, applying lessons learned in 2015.

“We’ll keep pressing ahead on the battlefield, we’ll keep supporting the Afghan forces, [and] we’ll keep making sure that the governance continues to mature,” the general said.

When all of those things align and the Taliban figure out that they have no chance of winning on the battlefield, the chairman told reporters, “then the prospects of reconciliation will increase.”