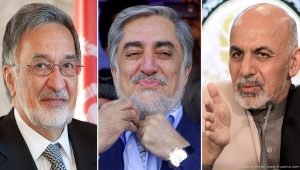 The Independent Election Commission of Afghanistan (IEC) released the partial vote results of the presidential election on Sunday.

IEC Chief, Yousuf Nuristani said the election result consists of 10 percent votes from 26 provinces which have been entered in to the system.

Preliminary election results put Dr. Abdullah in the lead by securing 41.9% of votes, Ashraf Ghani second by securing 37.5% and Zalmai Rassoul third by securing 9.8% of the votes.

Abdul Rab Rassoul Sayyaf was put in the fourth position by securing 5.1% of the votes, while Qutbuddin Helal secured 2.7%, Sherzai 2.2%, Sultanzoy 0.5% and Arsala 0.3% of the votes.

Nuristani said 500,000 votes have been counted in the part result and insisted that the preliminary vote result is not final and will change as fraud existed in almost all provinces.

He said the election commission has so far received 75% of the votes from across the country and the partial vote result does not include Farah, Nuristan, Paktika, Wardak, Ghazni, Badakhshan, Baghlan and Ghor provinces.

Nuristani also added that 25% of the votes which is equivalent to 500,000 votes have been counted but they have released only 10% of the vote result.