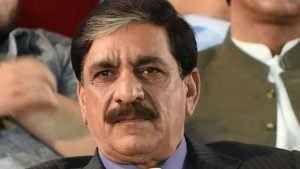 The National Security Advisor of Pakistan Nasser Khan Janjua is due to arrive in Kabul today for high level talks with the Afghan officials regarding the bilateral relations and other issues of mutual interest.

According to reports, Janjua is visiting Kabul on official invitation of his Afghan counterpart Mohammad Haneef Atmar.

The Office of the National Security Advisor of Pakistan in a statement has said that Mr. Janjua will hold talks with Mohammad Ashraf Ghani, Chief Executive Abdullah Abdullah, and the Afghan Intelligence Chief Masoom Stanikzai.

Sources in Pakistan have said the visit takes place amid ongoing efforts to improve the relations between Kabul and Islamabad which have seen some development during the recent weeks and months.

In the meantime, the Office of the National Advisor of Pakistan says Mr. Janjua will hold talks regarding the latest developments, specifically regarding President Ghani’s recent initiative for peace process.

According to the statement, Pakistan supports the Afghan peace process, insisting that a peaceful Afghanistan is in the best interest of Pakistan, specifically for the stability of the country.