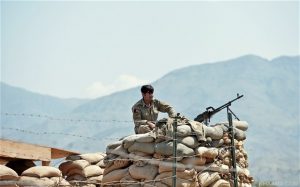 According to reports, scores of militants belong to Tehrik-e-Taliban Pakistan (TTP) have launched coordinated attack on Kunar province.

Provincial police chief, Gen. Abdul Habib Syed Khel, said sporadic clashes have been continuing between the Afghan forces and Taliban insurgents during the past four days.

However, Gen. Syed Khel, said the anti-government armed militants intensified the attack on the security check posts this moring.

He said at least seven militants have been killed so far and nearly 16 others have been wounded.

According to Gen. Syed Khel, the Afghan security forces are supported by anti-Taliban public uprising forces.