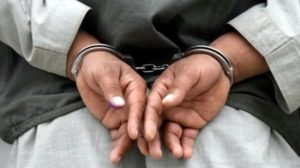 A Pakistani suicide bomber was arrested by Afghan security forces in eastern Nangarhar province of Afghanistan on Monday.

Afghanistan intelligence agency — National Directorate of Security (NDS) following a statement announced, “Afghan NDS forces on Monday arrested a Pakistani suicide bomber along with a suicide vest, an AK-47 along with ammunition and explosives in Nangarhar province.”

The statement further added, “The detained suicide bomber was recognized as Saifullah also known as Shamsullah, and is a resident of Baluchistan province.”

National Directorate of Security (NDS) in its statement also added that the suicide bomber was looking to carry out attack in Jalalabad city, and was injured during clashes with the Afghan security forces.

This comes as Afghan intelligence forces today thwarted a suicide attack on National Directorate of Security compound in capital Kabul. A suicide bomber in Afghan military uniform was shot dead before he manage to carry out attack.