Pakistani religious scholar under fire because of selfies with Qandeel Baloch 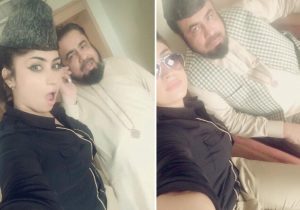 A famous Pakistani religious figure and politician Mufti Abdul Qavi is under fire because of selfies with a famous Pakistani model Qandeel Baloch which have gone viral in the social media websites.

Mufti Qavi is the head of the religious wing of Pakistan Tehrik-e-Insaf (PTI) which is led by former Pakistani cricketer Imran Khan.

The selfies went viral shortly after they were shared by the model late on Monday and since then the pictures have been widely shared mainly in Facebook and Twitter.

Qandeel is shown playfully posing for the selfie with Mufti Qavi’s signature hat on her head in one of the pictures.

She claims that Mufti Qavi had invited her to meet him in a hotel for Iftar as the latter is shown holding a cell phone to his ear.

Another picture shows Qandeel posing with Mufti Qavi, sitting next to him.

The social media users in Afghanistan have also reacted towards the move by by Mufti Qavi who are saying that the Pakistani religious figures are endorsing Jihad in Afghanistan regardless of the situation in their own country.

However, Mufti Qavi said that Qandeel Baloch was “like a daughter to him”, and that he was trying to bring her to “the right path”.

“I met Qandeel on her insistence and she has promised me that not only she will fast during Ramzan, she will also offer her prayers regularly,” he said.

Qandeel Baloch is a Pakistani social media sensation notable for her videos discussing her daily routine and various controversial issues.

She promised to strip naked if her country’s national team defeats India in Icc World Twenty20 in mid-March by posting an online video message on her Facebook page.

Turkey applies a 14-day quarantine on passengers from Afghanistan

The Turkish Embassy in Kabul has announced a new travel advisory for passengers from 8 countries...