Pakistani militants among 4 killed in US drone strike in Nangarhar 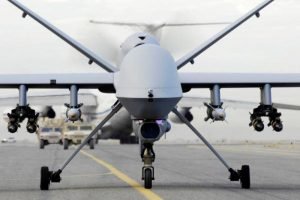 At least four militants including Pakistani nationals were killed in a drone strike in eastern Nangarhar province of Afghanistan.

The provincial government media office in a statement said the militants killed during the airstrike belonged to the ISIS terrorist group.

The statement further added that the airstrike was carried out Mamand Dara area of Achin district and the deaths included two Pakistani nationals.

Some weapons, ammunition, and explosives belonging to the terror group were also destroyed in the airstrike.

The ministry of defense of Afghanistan had eariler said at least two ISIS militants were killed and their hideout was destroyed in an airstrike conducted in Achin district of Nangarhar.

This comes as the Afghan national defense and security forces have stepped up counter-terrorism operations to suppress the insurgency activities of the militant groups.

The US forces based in Afghanistan also conduct airstrikes on militants hideouts as the terror groups attempt to expand their insurgency.