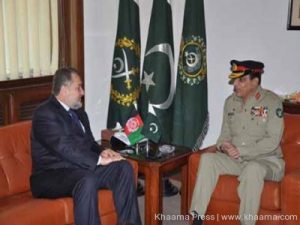 Islamabad and Kabul are close to signing a deal that will allow the Pakistan Army to train Afghan national security forces, in the latest sign of improving ties between the neighboring nations, The Express Tribune reported.

The Afghan defense minister, leading a six-member high-level defense delegation, arrived in Pakistan on Sunday for talks on defense cooperation and border coordination to boost anti-terror cooperation between the two countries.

The two sides discussed matters of professional interest, with particular focus on enhancing mutual defence cooperation and measures that Afghan and Pakistan forces intend for an enduring training relationship, according to a statement released by the Inter Services Public Relations.

The agreement is aimed at improving existing security cooperation and intelligence sharing mechanisms, on both sides of the Pak-Afghan border.

Pakistan has long been offering Afghanistan to train its army but, until now, Kabul had shown little interest, largely due to the trust deficit between the two countries.

General Kayani told the Afghan defence minister that Pakistan would make all-out efforts for a “peaceful, stable and united Afghanistan”.

Kayani maintained that the release of Taliban detainees was part of Pakistan’s ‘sincere efforts’ to help the Afghan-led and Afghan-owned reconciliation process.

He also assured the Afghan delegation of full support to bring normalcy to the border region, which “should have a direct and positive effect on the stability in Afghanistan so that situation could become ripe for the drawdown of Isaf forces in 2014”.