Pakistan says it has influence on Taliban but no control 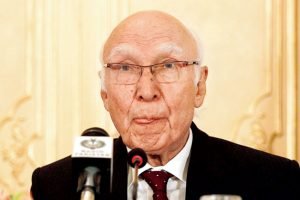 Pakistani Premier Mohammad Nawaz Sharif’s Adviser on Foreign Affairs has said that Pakistan has influence on Taliban but do not control them, the country’s state media Radio Pakistan reported on Wednesday.

“The international community has concerns about the Afghan issue and no world power wants war in Afghanistan. Pakistan and the US want resumption of talks between the Afghan government and Taliban.” Sartaj Aziz said, according to Radio Pakistan.

“It was up to the Afghan government to resume talks with Taliban and our job is just of a facilitator.”

His remarks come after the country’s former President and military ruler Pervez Musharaf admitted that Taliban were trained and sent to Afghanistan by Pakistan.

“We trained Taliban and sent them to fight against Russia. Taliban, Haqqani, Osama Bin Laden and Zawahiri were our heroes then.” Musharaf quoted by CNN-IBN as saying in an interview on Tuesday.

Afghan government has long asked Pakistan to stop supporting Taliban and other militant group against Afghanistan but so far only empty promises have been given.

Pakistan-based Afghan Taliban have announced war against the government of Afghanistan and its international allies.