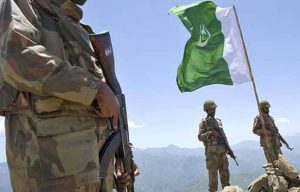 The Pakistani authorities have said two security personnel were injured in mortar fire from Afghanistan, including a major and another security personal.

The security officials quoted by local media have said at least nine shells were fired on the Ziarat checkpost at around 4.30pm.

The officials further added that the injured personnel have been identified as Major Farrukh and Havaldar Imran Khan and said they had been taken to Peshawar by a helicopter.

This comes as clashes erupted among the Afghan and Pakistani border forces in Goshta district of eastern Nangarhar province.

Local officials in Nangarhar said the clash erupted after the Afghan forces responded to heavy shelling by Pakistani military from across the Durand Line.

The officials said a soldier of the Afghan Border Police lost his life and two others were wounded during the clash which continued for several hours.

Clashes among the Afghan and Pakistani forces along the Durand Line have not been rare as numerous incidents have taken place in the past.