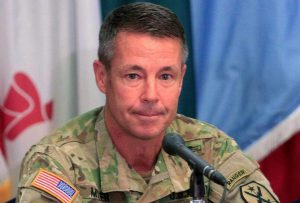 The U.S. Army general nominated to head U.S. military operations in Afghanistan has said that Pakistan, Russia, and Iran were continuing to support Taliban fighters.

In written remarks to the Senate Armed Services Committee, Lieutenant General Scott Miller, called the militant sanctuaries in Pakistan as one of the biggest challenges to Afghan stability.

Acknowledging that Pakistan has made many sacrifices and its security forces have fought bravely, Gen. Miller said “We have not yet seen these counterterrorism efforts against anti-Pakistan militants translate into definitive actions against Afghan Taliban or Haqqani leaders residing in Pakistan.”

This comes as the Afghan and US officials have long been criticizing Pakistan for the lack of action against the Taliban and Haqqani terrorist network leadership councils based in its soil.

However, Pakistani officials have repeatedly rejected the allegations and claim that the terror and militant groups have no organized presence in Pakistan.

In the meantime, Gen. Miller has said that the US must be careful not to withdraw too quickly, warning that the terror groups will regroup and plunge the country into deeper conflict.

Gen. Miller further added that a rapid and hasty withdrawal from Afghanistan could result in a situation similar to Iraq in 2015, when the Iraqi military collapsed after a U.S. withdrawal and Islamic State fighters seized vast swaths of the country.