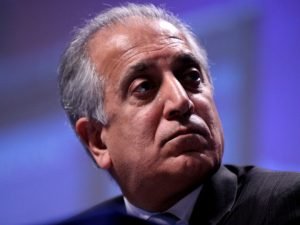 The former top American diplomat Zalmay Khalilzad has said Pakistan has been playing a dangerous game since the Taliban group was overthrown.

In his testimony before the House Committee on Foreign Affairs, Khalilzad said Pakistani proxies pose a severe threat to coalition and Afghan forces and civilians. “Indeed, Pakistani policy is the principal cause of the ongoing conflict in Afghanistan.”

Khalilzad further added “More broadly, Pakistan’s use of extremist and terrorist proxies – including to threaten India — is a significant contributor to the global menace of Islamic extremism. It must be confronted if we are to succeed in defeating terrorism and extremism around the world.”

According to Khalilzad, poor governance by the Afghan government is a factor in Kabul’s inability to defeat the insurgents. But the Taliban’s resilience can be attributed above all to the strategic decision of the Pakistani military and intelligence services to provide sanctuary and support to these groups.

“Pakistan views the Taliban as an effective proxy to ensure Pakistani dominance over Afghanistan,” Khalilzad added. “Islamabad also believes that continuing the war in Afghanistan will lead to a U.S. withdrawal, which would change the balance of power against the current government and in favor of its proxies. Ultimately, Pakistan seeks the overthrow of the current government in Afghanistan because it is not compliant.”

In his recommendations, Khalilzad said the May 21 killing of Taliban leader Mullah Akhtar Mansour in a U.S. drone strike has created a golden hour to confront Pakistan. Washington can force Islamabad to make a choice: U.S. aid and international support or a continued relationship with the Haqqani network and irreconcilable Taliban.

“Catalyzing a decisive effect on Pakistani policy, however, will require the U.S. to escalate pressure on Islamabad,” Khalilzad said, adding that “Otherwise the opportunity will dissipate. For Islamabad to break with the Haqqani network and the Taliban, the Pakistani leadership needs to see that continued support for the insurgency will come at a high price.”

He also added that escalating drone strikes against Haqqani and irreconcilable Taliban leaders would deliver that message, but drone strikes alone will not be enough without corresponding political and financial pressure.

On the financial side, Khalilzad said Pakistan has been an enormous beneficiary of international support — specifically from Coalition support funds, bilateral assistance, and multilateral assistance from the IMF and World Bank. In addition to cutting off this assistance, Washington should warn Pakistan that it will face escalating financial sanctions—like those once imposed on Iran—unless it facilitates reconciliation talks between the Afghan government and the Taliban.

According to Khalilzad, as an initial step, the U.S. can impose financial and travel restrictions on senior Pakistani officials known to be complicit in the insurgency, and freeze funds in U.S. banks belonging to Pakistani entities—both military and corporate—involved in financing the Taliban.

Politically, Pakistan cannot be a member in good standing of the international community so long as its agencies or military services aggress against Afghanistan, he added.

Khalilzad said the U.N. Security Council is an appropriate venue in which to raise Pakistan’s aggression against Afghanistan. To help secure international support for a U.S.-Afghan-sponsored resolution condemning Pakistan, the U.S. should declassify and broadcast information indicating Pakistani support for the insurgency and its narcotics trafficking.