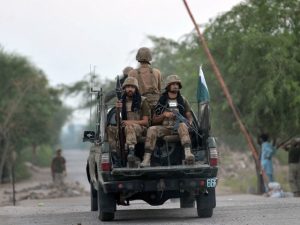 Pakistan has issued a security alert of possible suicide attacks in one of its seven tribal agencies along the Afghanistan border.

According to Pakistan’s The Express Tribune news, intelligence agencies reportedly alerted the political administration of Jamrud tehsil that 13 suicide bombers from a banned militant organisation have entered there.

The Frontier Corps has started checking vehicles amid tight security and khasadar forces were deployed at check posts in Jamrud tehsil where they have arrested one suspect during the search operation.

The media report claims that the suicide bombers have been sent to Jamrud tehsil through Afghanistan but Afghan government has not yet commented on the report.

Due to the tense security situation, Torkham-Peshawar highway which passes through Jamrud tehsil remained close on Friday.

Khyber Agency is reportedly the hotspot of Lashkar-i-Islam militant group which also operates across the border into Afghanistan.

Jamrud tehsil has witnessed some deadly explosions in the past including a suicide attack inside a mosque in 2011 that left at least 30 people killed and over 100 others wounded.