Pakistan Is at War Against the Afghan People: Amrullah Saleh 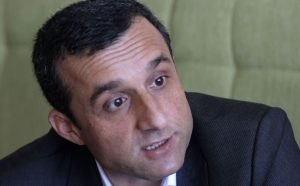 Saleh said a series of deadly attacks plotted and coordinated by Taliban militants in coordination with ISI is aimed at cementing power for Taliban’s new leader Mullah Akhtar Mansoor.

“The Taliban have a reputation for brutality and mercilessness to defend. Their new leader Mullah Akhtar Mansoor wants to prove that he can maintain these capabilities,” Saleh told Spiegel Online during an exclusive interview.

Saleh further added “All the major attacks require enormous military and financial resources. They are planned and executed with the aid of ISI, Pakistan’s secret service. The aim of the attacks is to establish Mansoor as the new strong man.”

“The violence is intended to show that the Taliban brand still exists, and the message as the same as before — that the Talban is united and powerful,” he added.

Another explosion rocked capital Kabul this afternoon after a suicide bomber detonated a vehicle packed with explosives in one of Kabul’s busiest places in Macroryan, leaving at least three people dead and twenty seven others wounded.