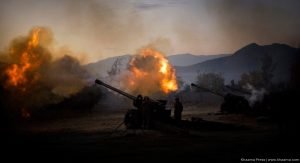 At least 16 rockets were fired in eastern Kunar province of Afghanistan from the other side of Durand Line in the latest wave of cross-border shelling.

Syed Khel confirmed that the shelling did not result to loss of life or damages to the properties of the local residents.

This comes as a number of the Afghan senators warned last week that they will reject the bilateral security agreement if cross-border shelling by Pakistan continues in eastern Afghanistan.

The senators criticized Washington for remaining reckless regarding the persistent shelling in eastern Kunar province following the signing of the security agreement.

The Pakistani military has been shelling eastern provinces of Afghanistan, specifically eastern Kunar province during the recent years.

Dozens of people have been killed or injured while several others have been forced to flee the area due to persistent shelling by Pakistani military.

According to reports, the Pakistani military has fired over 5,000 rockets in Kunar province during the past two years.