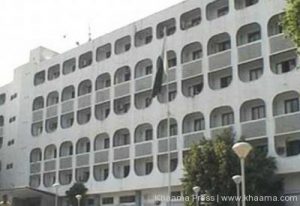 In the latest sign of worsening relations between Kabul and Islamabad, Pakistan on Thursday accused Afghanistan of overreacting after Kabul cancelled a military visit to protest against cross-border firing.

A spokesman for the ministry of foreing affairs of Pakistan Aizaz Ahmad Chaudhry told AFP, “We believe that Afghanistan overreacted to a small incident.”

The Afghanistan government cancelled a visit of around 11 Afghan national army officers to take part in a military exercise in the southwestern city of Quetta following cross-border incursion by Pakistan calling it as “unacceptable Pakistani artillery shelling.”

Relations between Kabul and Islamabad hit a new low after provincial governor for eastern Kunar province of Afghanistan Fazlullah Wahidi said p to 50 rockets fired from Pakistan damaged property on Monday and Tuesday.

However the Pakistani foreign ministry said its “disciplined and responsible” troops had responded to what it called “some intrusions from the Afghan side.”

Aizaz Ahmad told AFP that the visit of Afghan army officers had designed to increase “mutual cooperation and confidence, and we believe such activities should continue in the larger interest of peace in the region.”