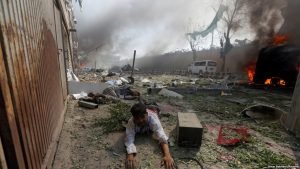 The Haqqani terrorist network based in Pakistan was behind the deadly attack in capital Kabul which left at least 80 people dead, the Afghan intelligence said.

According to a statement by NDS, credible intelligence information confirms the attack was carried out by the network on direct instructions and with the support of the Pakistani military intelligence, Inter Services Intelligence.

The incident in the diplomatic area of Kabul took place around 8:30 am local time after a vehicle packed with explosives was detonated.

The  ministry of public health officials said at least 80 people were killed and over 350 others were wounded in the attack.

The Taliban group, having close links with the Haqqani terrorist network, rejected the group was behind the attack.

aliban spokesman Zabiullah Mujahid in a statement said the group has no role in the attack and the Taliban fighters were also not involved in it as they are not allowed to carry out attacks in areas where there are no targets.

Mujahid also added that the group strongly condemns today’s attack in the city.

The Ministry of Interior spokesman Najib Danish said the attack was likely carried out using a truck full of explosives which was detonated close to Zambaq square, place to several diplomatic missions, including some embassies.

The Ministry of Public spokesman Wahid Majroh confirmed that 80 people were killed and over 350 others were wounded in the attack.

He said the casualties toll may change as the victims of the incident have been shifted to various hospitals.