Pakistan allowed US drone strikes in a secret deal with CIA 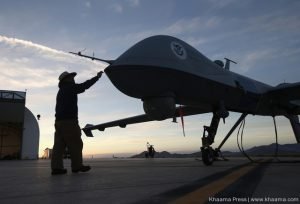 According to reports, Pakistani allowed American drone strikes on its soil in a secret deal that CIA agreed to kill the Taliban leader Nek Muhammad.

Mr. Muhammad and his followers had been killed by the C.I.A., the first time it had deployed a Predator drone in Pakistan to carry out a “targeted killing”, The New York Times reported.

The deal also restricted CIA drones to stay stay away from its nuclear facilities and the mountain camps where Kashmiri militants were trained for attacks in India.

According to the New York Times, Pakistani intelligence officials insisted that drones fly only in narrow parts of the tribal areas ensuring that they would not venture where Islamabad did not want the Americans going: Pakistan’s nuclear facilities, and the mountain camps where Kashmiri militants were trained for attacks in India.”

New Times in its report also added that Pakistani officials insisted that they be allowed to approve each drone strike, giving them tight control over the list of targets.

According to reports the offer by a CIA official regarding the ISI’s agreement to allow regular armed drone flights over the tribal areas was presented to ISI chief Ehsan ul Haq.

Under the agreement, ISI and CIA agreed that US would never acknowledge the missile strikes under the “covert action authority” and that Pakistan would either take credit for the individual killings or remain silent.

This comes as Pakistani officials have long been criticized US for violating its sovereignty through drone strikes however New York Times stated that it was Muhammad’s rise to power that forced them to reconsider their line of thought and eventually allow Predator drones.

The covert drone war begun under the Bush administration and was further expanded during president Barack Obama’s leadership under the ISI-CIA “back-room bargin”.

CIA changed its focus from capturing terrorists to killing under the deal which helped transform an agency that began as a cold war espionage service into a paramilitary organiazation, The New York Times added in its report.