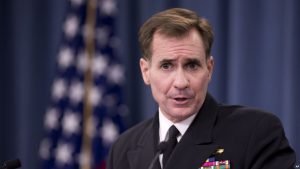 The bordering regions between Afghanistan and Pakistan are still safe havens for many terrorist groups, the US Department of State said Monday.

State Department spokesman John Kirby made the comments during the daily press briefing.

He was responding to a question regarding the issue of Durand Line and status as the formal border line between the two countries which Afghanistan opposes to recognize.

Without going to the issue of the line, Kirby said “We understand that the border region is still a safe haven for many terrorist groups. That’s point one.”

Kirby further added “Point two: We understand that the governments in Afghanistan and Pakistan know this themselves and have made efforts in the past to work together to try to address that threat. That’s point two.”

“Point three: We understand that that effort also has not always gone smoothly, and we continue to urge those two governments to work together along that spine to eliminate the safe haven that so many groups there still enjoy, because those groups are targeting both Afghan and Pakistani civilians – innocent people that continue to die and be maimed by these groups,” Kirby said.

The remarks by Kirby comes as the Afghan officials believe that the Taliban group and Haqqani terrorist network leaderships are still based in Pakistan as they enjoy immunity from the ongoing operations in the tribal regions of the country.