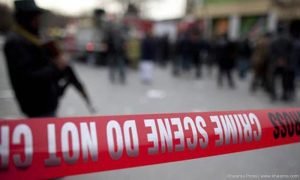 A journalist of the Pajhwok Afghan News, Azizullah Hamdard was injured following an attack by unknown gunmen in capital Kabul.

The attack on Hamdard was carried out near his residence in capital Kabul on Saturday night, Nai organization which supports open media in Afghanistan said.

A statement released by Nai, said the bullet tore through the left hand of Hamdard and he is currently under treatment in a hospital in capital Kabul.

Hamdard linked the attack to his journalism related activities since he had disclosed numerous facts regarding fraud during the two rounds of presidential elections.

According to Hamdard, he was also forced to leave the polling stations on several occasions.

In the meantime, Nai organization condemned attack on Azizullah Hamdard and called on security institutions to take immediate steps to arrest and try those involved behind the attack.