Osama’s son calls on followers in Kabul, Baghdad, Gaza to wage jihad on the West 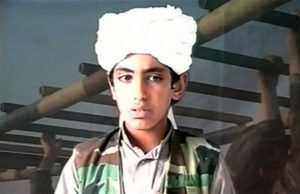 The son of the former Al Qaeda chief Osama bin Laden has called on his followers in Kabul, Baghdad and Gaza to wage jihad on the West.

The demand by Osama’s son, Hamza Bin Laden, was made in an audio message released by al Qaeda website.

Touted as a future leader of the terror network, Hamza is believed to have taken part in attacks in Pakistan and Afghanistan as early as 2005.

The Al-Jazeera network broadcast footage that appeared to show him among Taliban fighters in Afghanistan during the US-led invasion of Afghanistan in 2001.

Hamza specifically suggests London, Washington, Paris and Tel Aviv as targets for attacks i the audio message shared by jihadidsts on Twitter.

The al Qaeda supreme leader Osama bin Laden wanted to nurture Hamza as his successor in the group, according to documents confiscated from bin Ladens’ Abbottabad hideout by US forces.

Hamza was due to travel to Abbottabad to join his father when US forces raided the hideout.