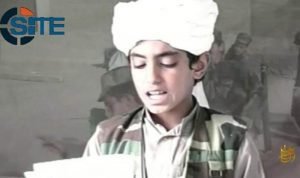 The son of Osama bin Laden has called on Saudi people to join global jihad in a bid to overthrow the regime in the kingdom of Saudi Arabia.

urged Saudi youth to join the Yemen-based Al-Qaeda in the Arabian Peninsula (AQAP) to “gain the necessary experience” in waging “intifada” to free the country from the Al-Saud family, SITE Intelligence Group reported.

Yemen is the ancestral home of Saudi-born Osama bin Laden, who was killed in Pakistan in 2011 by an elite team of US Navy Seals after a decade on the run.

The audio message released on Wednesday was his fourth speech since August 2015, as he tries to assert his influence over the global terrorist network.

While Al-Qaeda has been headed by Ayman Al Zawahri since 2011, experts believe that Hamza is aiming for the top terrorist position.

The audio message has been released at a time when the Saudi-led coalition is battling Iran-backed rebels in Yemen as well as Sunni jihadists who have joined Aqap and Islamic State.