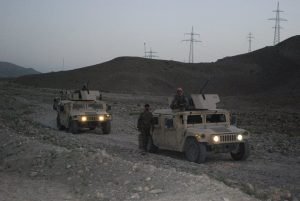 The Afghan armed forces have launched an operation in Surobi district of Kabul after a coordinated attack by the militants on a security post last week.

The 201st Silab Corps of the Afghan Military in the East said the operations, Qahri Silab Number Three, are jointly being conducted to improve the security of Lata Band area ahead of the parliamentary and district councils elections.

A statement by Silab Corps stated that the operations are jointly being conducted by the Afghan army, Afghan police Special Forces, Border Police and Afghan Local Police, and the Afghan Intelligence operatives.

The statement further added that a full coordination is in place with the 111th Army Division of the Afghan Military while operations are being conducted.

According to Silab, several villages in the area have been fully cleared from the presence of the militants during the operations so far.

This comes as the Afghan armed forces suffered casualties in an attack by the Taliban militants on a security post in Surobi district last week.

Security sources in Kabul confirmed that the incident took place late on Tuesday night in the vicinity of Surobi district.

The sources further added at least six soldiers lost their lives and at least four others were wounded in the attack.

Share
Facebook
Twitter
WhatsApp
Linkedin
Email
Print
Tumblr
Telegram
Previous article
New political coalition share demands regarding the cases of Dostum and Qaisari
Next article
Will propose transitional govt in the event of a crisis due to elections: Noor
- Advertisement -