One of Kabul rape victims dies in hospital 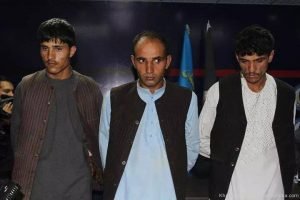 One of the four women who was raped a group of men in capital Kabul has died in the hospital, public health officials said.

The identity of the victim has been disclosed so far, however reports suggest that the deceased was an 18-year-old girl.

At least 6 people including the leader of a 16-member gang have been arrested in connection to the robbery and rape of four women in Qargha district of Kabul city.

According Kabul police officials, the family were returning from a wedding when their vehicle was stopped by the gunmen in Qargha, and were taken to unknown location where they were later raped and their men were beaten.

Deputy interior minister for security, Gen. Ayub Salangi, said Monday that two of the suspects had escaped to Ghazni province and were arrested by police on Monday evening.

Kabul police chief, Gen. Zahir has said that one of the woman was repeatedly raped for at least ten times in front of her family.

Gen. Zahir further added that the group was arrested in the past over robbery and kidnap charges but were released due to unknown reasons.

He said the suspects have confessed that the women were also tortured besides they were gang raped by the group.

5 thoughts on “One of Kabul rape victims dies in hospital”