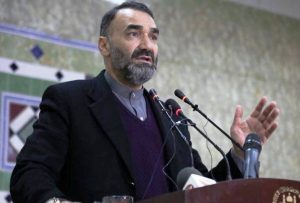 The ousted governor of the northern Balkh province and chief executive of Jamiat-e-Islami Ata Mohammad Noor has warned of consequences if the government military option against him over the controversial issue of the Balkh government leadership.

Noor made the remarks during another gathering attended by his supporters in Mazar-e-Sharif city, the provincial capital of Balkh province.

He claimed that the use of force against him will result to disintegration among the security forces as 80 percent of the security personnel are not willing to act against him.

Noor further added that he will remain as the governor of Balkh province until the government does not respond positively to his demands.

The Afghan government announced nearly three weeks ago that the resignation of Ata Mohammad Noor from the Balkh government has been approved by President Mohammad Ashraf Ghani.