Noor warns of civil uprising or negotiations fail with the govt 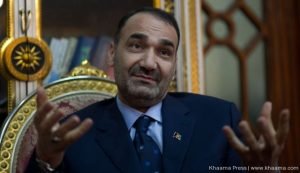 The chief executive of Jamiat-e-Islami Ata Mohammad Noor has warned of civil uprising if the ongoing negotiations fail to put an end to ongoing controversies between him and the government.

Speaking during a gathering in Mazar-e-Sharif city, Noor said the first round of talks between Jamiat-e-Islami and the government of national unity has been organized.

He once again reiterated that he is the governor of the northern Balkh province and will remain as the governor until the end of the unity government’s term.

This comes as efforts are underway to introduce the new governor of the northern Balkh province after the presidential office announced the approval of Noor’s resignation from the Balkh government leadership.

Speaking during another gathering nearly two weeks ago Noor had said none one can dismiss him as the governor of Balkh province by issuing a decree, insisting that the political party he is representing is one of the main sides which played a key role in the formation of the government of national unity.