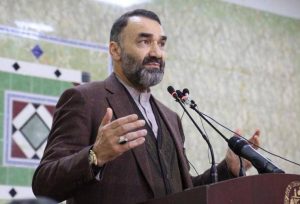 The Chief Executive of Jamiat-e-Islami Ata Mohammad Noor has threatened to use the revenues of Hairatan port if the government blocks the release of funds on his signature to pay the provincial expenses.

Noor issued the latest warnings as he was speaking during a gathering of his support in Mazar-e-sharif city amid an ongoing stalemate between him and the government.

This comes as the officials in the Independent Directorate of the Local Governance had earlier said that the signatures of the officials who have been removed or have resigned themselves will not be acceptable in the government affairs.

However, Noor said the directorate is not having that much authority to speak against him or talk about the major political issues.

Insisting that he is the governor of the Balkh province, Noor said he will use the revenues of Hairatan which reaches to millions and will pay the government expenses and salaries if the government blocks his signature to authorize the payments.

He said keeping Noor as Balkh governor and implementation of the National Unity Government treaty were among the key demands of the Jamiat-e-Islami party in the proposal of the party in a bid to end the ongoing political deadlock.