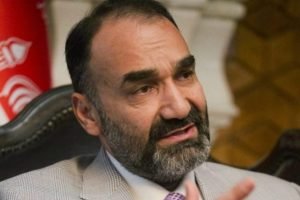 The provincial governor of the northern Balkh province Ata Mohammad strongly reacted to coordinated suicide attack that targeted the funeral ceremony of Salim Izadyar in Kabul on Saturday afternoon, calling it a cowardly conspiracy.

Noor who is also the chief executive of Jamiat-e-Islami, issued a statement after the attack and said such attacks further increases the doubts regarding the hand of certain circles inside the system.

Calling the yesterday’s incident a direct attack on a specific political movement, Noor also harshly criticized the security establishments and questioned their capabilities to ensure security for a small gathering despite having credible intelligence information and reports regarding the possible attacks.

He said the time has come to take immediate and serious decisions for the safety of the people together with the Jamiat-e-Islami and its political allies.

No group including the Taliban insurgents has so far claimed responsibility behind the attack so far.

Salim Izadyar, the son of Mohammad Alam Izadyar, the first deputy house speaker of the Afghan Senate, was killed during the violent protests in Kabul on Friday.

The Ministry of Interior confirmed 6 people were killed and 87 others were wounded in the coordinated explosions targeting the burial ceremony of Mohammad Salim Izadyar.