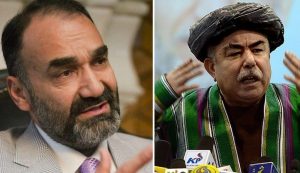 The acting provincial governor of northern Balkh province and Chief Executive of Jamiat-e-Islami party Ata Mohammad Noor has claimed that several people were left dead in an attack by the supporters of Junbish Milli party which is led by Vice President General Abdul Rashid Dostum.

According to a statement by Noor, the attack was carried out late on Tuesday night which followed by a major attack by the Taliban militants in Almar district.

The statement further added that the attack was carried out by the fighters of commander Nezamuddin who is a special aide of Gen. Dostum and another commander of Junbish Milli Hanif Almani.

Noor said the clashes between the two sides continued until Wednesday afternoon as the supporters of Gen. Farooq Qateh responded to the attack, leaving several people dead from the two sides, including the head of youth of Jamiat-e-Islami Zaman Qateh.

He said the fighters of Jamiat-e-Islami were fighting the militants in Lolash, Qaisar, Almar, Bulcharagh, Pashtunkot, and Sar Hawz in the past 13 days, criticizing the security institutions for remaining reckless to support the public uprising forces.

Noor also criticized the security institutions including the interior minister, acting NDS chief and Chief of Army Staff for not responding to their request and intervene to end the clash.

However, the supporters of Gen. Dostum have rejected the allegation as baseless and have claimed that the attack was initially launched by Gen. Qateh supporters on Junbish Milli supporters.

The Junbish Milli supporters have also claimed that the clash erupted as the supporters of the party were going back to their areas to resettle but faced resistance from the Jamiat party supporters.

This comes nearly two after tensions sparked among supporters of Jamiat and Junbish parties in northern Balkh province over removal of Gen. Dostum’s posters and photographs from Mazar-e-Sharif city.