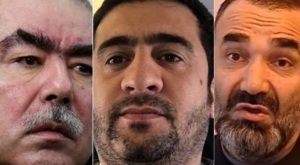 The provincial governor of the northern Balkh province and chief executive of Jamiat-e-Islami Ata Mohammad Noor has called the Hezb-e-Islami leader Gulbuddin Hekmatyar the ‘Butcher of Kabul’ as he renewed his stance against the latest upheavals, mainly involving the heated exchange of words between the two prominent political parties.

Speaking during a gathering in northern Samangan province, Noor called on Hekmatyar to return to the original place from where he has returned, pointing towards the caves once used by the militants and militant leaders to hide during the conflict.

Noor further added that Hekmatyar has started to insult Jamiat-e-Islami since he returned to the country.

He also added that Hekmatyar has a history of sparking tensions and used to spark violence among the Jihadi leaders and political parties during the civil war.

The chief of executive of Jamiat-e-Islami said Hekmatyar has lost his everything and even used girls to carry out a suicide attack, calling it the first ever use of women for the suicide bombings in the country.

In other parts of his speech, Noor asked the government to refrain from hatching conspiracies as he was apparently pointing towards the controversial case involving the Balkh provincial council member Asif Momand.

Calling Momand a ‘Fly’, Noor said his party has the ability to compete with the president and insisted that cutting the edge of a ear is small matter as compared to the bloodshed and killing of civilians.