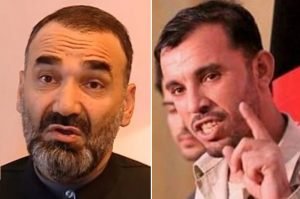 In a statement posted online, Noor claimed that Gen. Raziq’s assassination in a safe place and under strict security measures prove that he has been due to the conspiracies of his rivals and inner circles having links with the top government officials.

Taliban spokesman Zabiullah Mujahid in a statement claimed responsibility behind the attack and said the attack was carried out an infiltrator of the group Abu Dujana.

Mujahid went on to claim that the attack was carried out during a meeting in the provincial government compound and as a result a number of other senior officials have sustained injuries.

The NATO-led Resolute Support Mission in a statement confirmed the incident and said two Americans have sustained injuries but the RS and U.S. forces Commander Gen. Scott Miller has escaped the attack unhurt.

Pakistan to Play Three T20Is Against Afghanistan in UAE in March

China Warns US over Shooting Down Suspected Spy Balloon

US Deliberately Fuels the Fire in Ukraine Conflict: Russian Diplomat

Pakistan to Play Three T20Is Against Afghanistan in UAE in March

The people and Government of Pakistan extended their unwavering...

Union minister Anurag Thakur has claimed that India is...